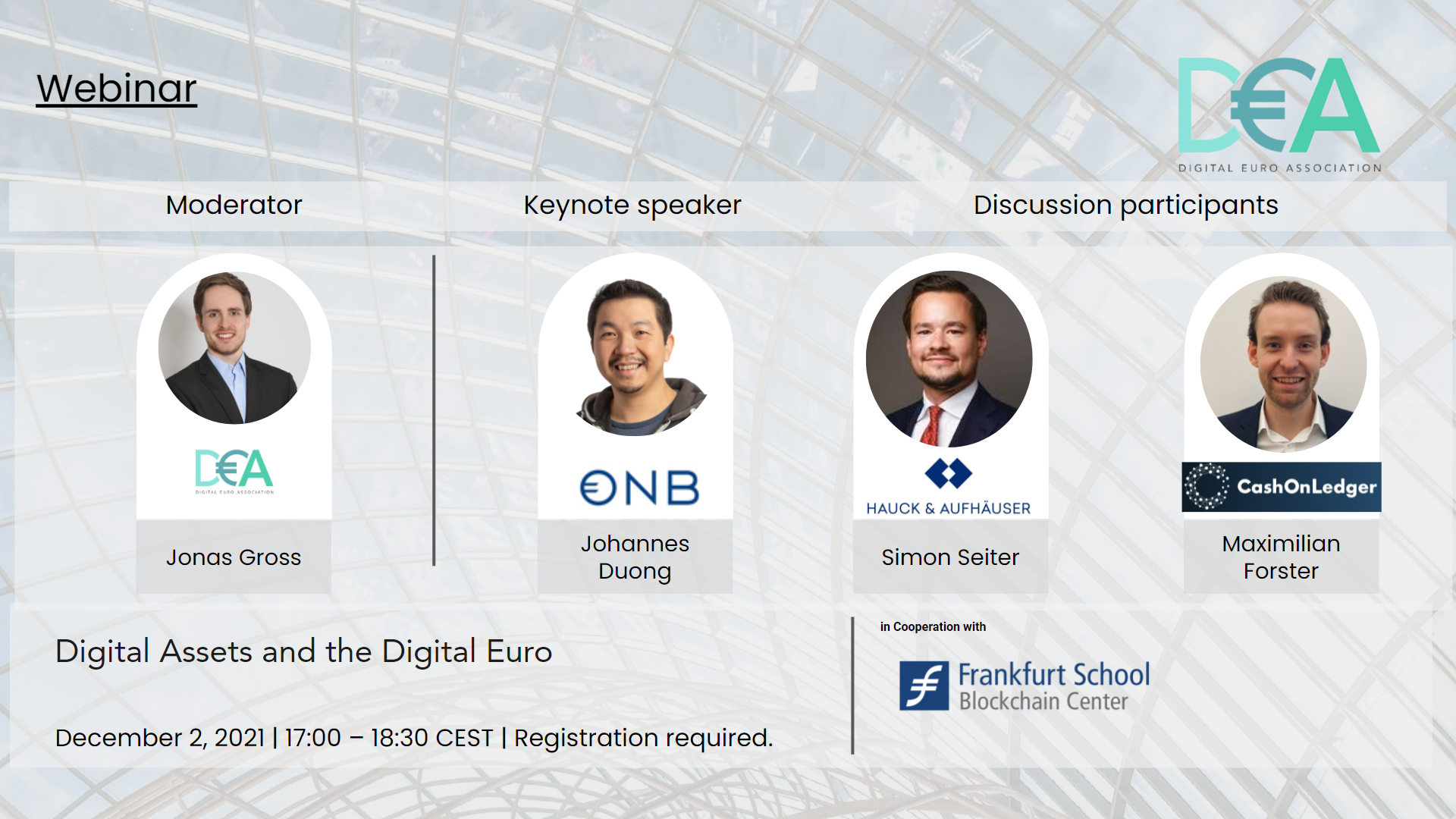 Digitization of financial assets promises tremendous benefits to the capital markets, such as executing fast, efficient, and secure transactions via distributed ledger technologies (DLTs). First financial institutions across the globe look for opportunities to integrate blockchain technology into their security offerings, such as blockchain-based bonds. The World Bank pioneered by issuing a new blockchain-based debt instrument and launched its bond-i already back in August 2018. Today, digital assets are already allowed by the regulator, e.g., in Germany, and will thrive over the next years.

One promising way for digital assets is to settle in central bank money, via a wholesale central bank digital currency (CBDC). While the first central bank pioneered wholesale CBDCs, the Austrian Central Bank has recently conducted a research project for settling a digital asset with central bank money. In their DELPHI (Delivery vs. Payment Hybrid Initiative) project, appropriateness of blockchain technology for issuing and settling digital bonds in real time using a wholesale CBDC was explored. The Austrian Central Bank issued a wholesale CBDC that was used to pay for the digital bond. Potential deliveries of this blockchain-based project are to assess the compatibility of the current legal framework and its various amendment needs and to evaluate the applicability of this project learnings to the market needs.

The aim of this webinar is to discuss how the digital euro will support the digitization of financial assets, such as bonds. In this context, the role of public sector solutions, such as wholesale CBDCs, are explored alongside private-sector solutions.

In particular, in this webinar, we focus on addressing the following questions among others:

Private Sector and Digital Euro – The regulated Internet of Value

Tony McLaughlin, Managing Director Transaction Banking at Citi Bank, will present his proposal for a tokenized regulated liabilities network as a complement to unregulated stablecoins and CBDCs.
Digital payment solutions based on distributed ledger technology (DLT) are seen as a highly disruptive force in payment ecosystems of national fiat currencies all around the world. Various institutions have increased their efforts to modernize payment infrastructures and to realize the potential efficiency gains of tokenized money. This includes central banks as the monetary institutions of the public sector but also many private stablecoin providers around the globe.
As DLT has the potential to represent multiple forms of digital value, we might go further and envision the creation of networks that tokenize regulated liabilities and regulated assets on the same chain. Such a network would be significantly different from today’s siloed financial architecture: It would embody all types of tokenized assets and money in an ‘always on’, programmable and global network — a regulated internet of value.
The aim of this webinar is to understand the “tokenization thesis” and the proposal of the regulated internet of value better. In particular, we will focus among others on these questions:

After the summer break, the Digital Euro Association hosts a webinar on the aspect of privacy for central bank digital currencies (CBDCs). Most of the central banks around the world consider issuing a CBDC mainly as a consequence of the declining use of cash as a means of payment and to position themselves against increased competition from novel forms of private sector-issued money such as cryptocurrencies and stablecoins. In most jurisdictions, CBDC design requirements and design principles are currently being analyzed and discussed. A consultation by the European Central Bank (ECB) revealed that privacy seems to be the most important requirement for a CBDC for European citizens. Privacy of transaction data is important for ensuring the security of the data and fair pricing, and avoiding data exploitation, amongst others. Therefore, a high degree of data privacy while complying with regulations such as anti-money laundering and combating the financing of terrorism seems to be desirable for a CBDC.

In consideration of these points, in this webinar, we focus on the topic of privacy of CBDCs and, amongst others, address the following questions: 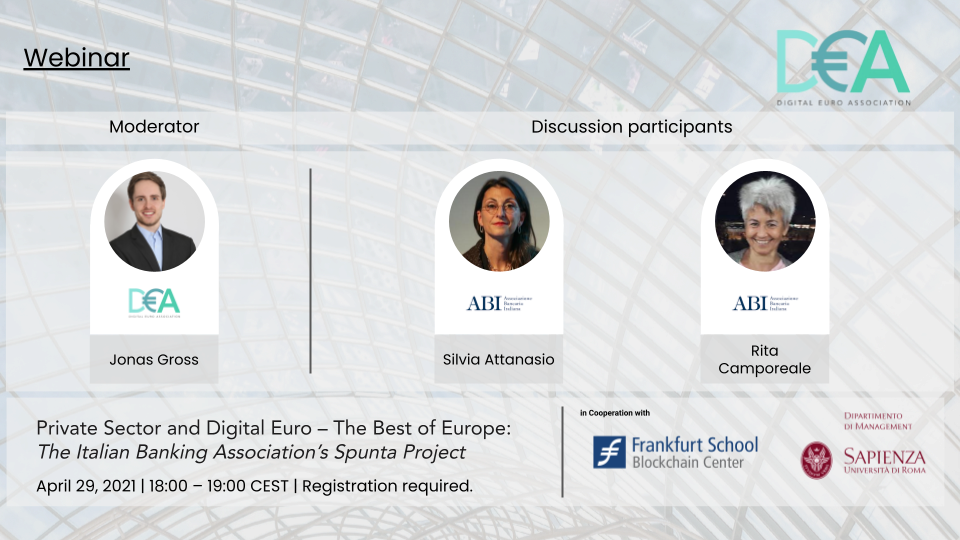 Digital payment solutions constitute an important strategic building block in Europe’s quest for digital competitiveness and strategic autonomy. Various European institutions have increased their efforts to modernize the payment infrastructures in Europe, including the Digital Finance Package by the European Commission and the inquiry into a digital euro by the European Central Bank (ECB). However, in particular, the private sector is at the forefront of analyzing the impact of a digital Euro, e.g., in this context, a digital euro based on distributed ledger technology (DLT).

The aim of this webinar series is to present different and well-known digital euro projects from the private sector across the whole of Europe.

In particular, in this first webinar of this webinar series, we focus on the Italian Banking Association’s (ABI) Spunta project and address the following questions: 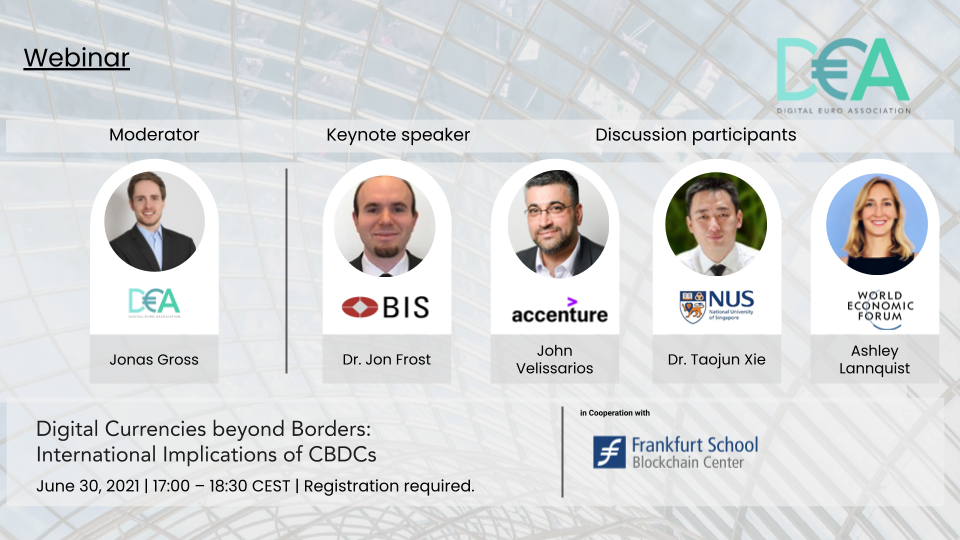 Today, cross-border payment systems are far from being frictionless and efficient. According to data by the World Bank, for cross-border payments, on average, more than 7% transaction fees are charged. Central bank digital currencies (CBDCs) have the potential to improve these international payment processes in various ways. At this point, standardization, harmonization and interoperability between domestic payment systems with possible different payment arrangements become strikingly important. A committed cooperation to build a bridge between multi-currency cross-border payments through an enhanced financial infrastructure with the design principles supporting privacy, security, fairness, efficiency, inclusivity, and legal compliance would bring about a promising solution. Additionally, international implications of CBDCs need to be further studied as CBDCs could impact exchange rates, international capital flows, and, in general, also the supremacy of specific currencies.

In particular, in this webinar, we focus on the international dimension of CBDCs and, amongst others, address the following questions: 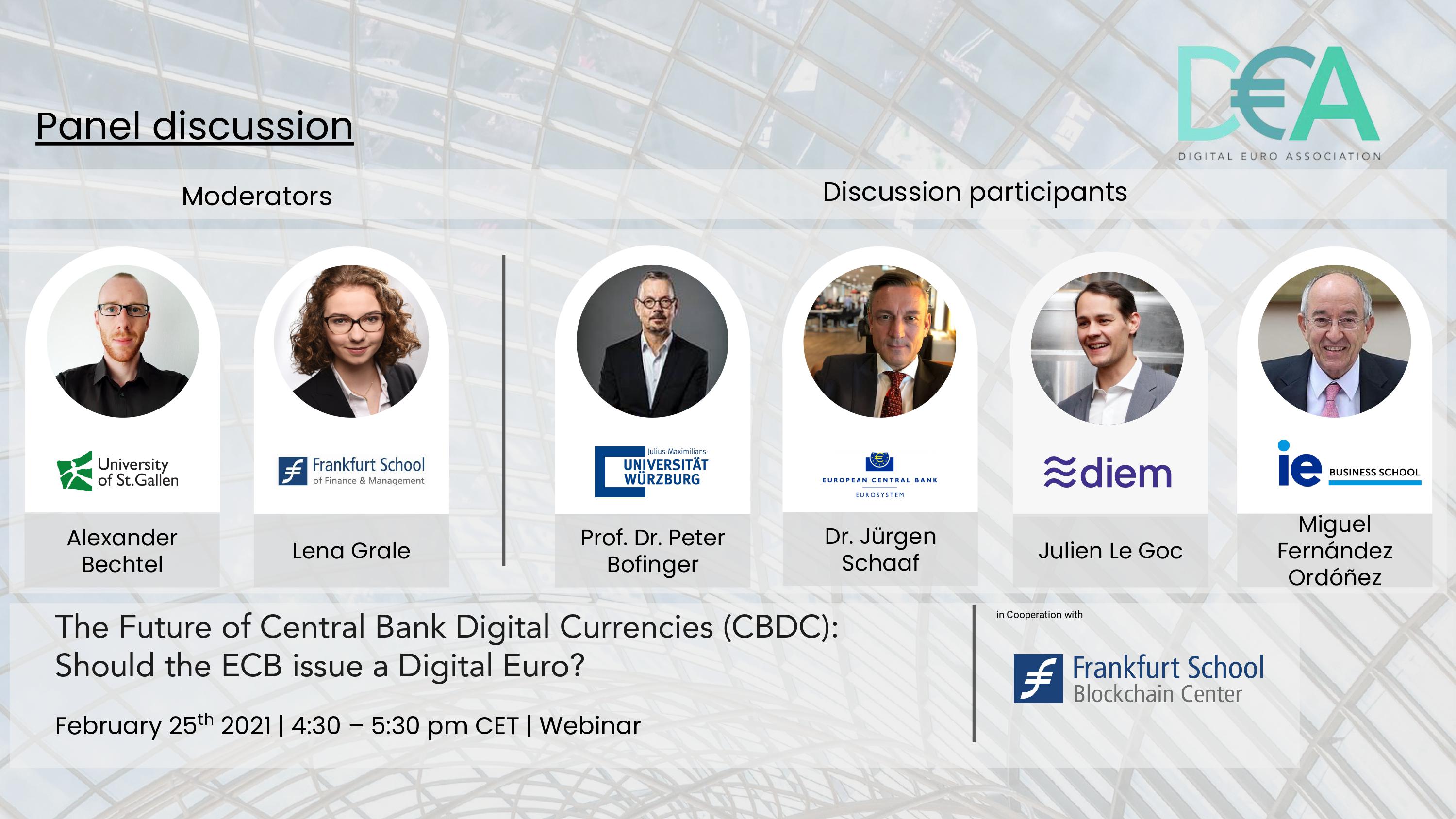 The Future of Central Bank Digital Currencies (CBDC): Should the ECB issue a Digital Euro?

The publication of the first Libra white paper in June 2019 was a wake-up call for central banks around the world. Many of them started to intensify their efforts regarding the issuance of an own central bank digital currency (CBDC). According to a study conducted by the Bank for International Settlements (BIS), 80% of central banks worldwide are currently working on a CBDC. First projects have been launched, such as the Sand Dollar in the Bahamas. Others, such as China, are actively testing their CBDC called DC/EP. The European Central Bank (ECB) is also looking into the possibility of introducing a CBDC for the Euro Area, the digital euro. Therefore, a digital euro might become reality in a few years.

In this webinar, we focus on the digital euro project and address the following questions:

The Digital Euro Association (DEA) is a think tank specializing in central bank digital currencies (CBDCs), stablecoins, crypto assets, and other forms of digital money. In particular, we focus on the digital euro. Our mission is to contribute to the public and political discourse through research, education, and by providing a platform and community for policy-makers, technologists, and economists to discuss digital money-related topics. We are committed to independence and excellence, aiming to set the agenda and to shape policy by encouraging new ideas and forward-thinking in the field of digital money. We target new and innovative topics such as the digital euro and Stablecoins, but also “classical” crypto assets such as Bitcoin and Ether.